It was early in the morning when we started our road trip to the Taj City. A road trip is always a good idea and it’s worth fuel and time. Being on highway was awesome without any traffic jam and noisy crowd. Morning chill and fresh breeze made us active and the greenery on road side looked beautiful with sunrise. As one could see many cars moving out towards the highway, it seemed a lot of people were travelling because of long weekend. We visited only Taj Mahal duing our first visit to Agra, so we planned to cover the other places in Agra during this second trip. After driving for around 4 hours, we reached the Taj City. Agra is one of the popular tourist destinations in India because of its many Mughal-era buildings. 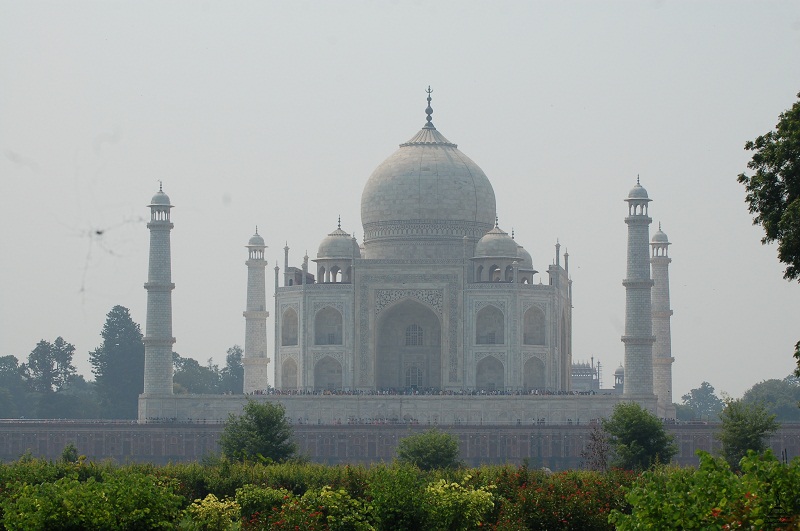 ‘Mehtab Bagh’ is a river side garden along with the ruined foundation of black Taj Mahal. It was very less crowded as compared to Taj Mahal complex. Very few people were in this view point and we could see a big crowd on top of Taj Mahal.

Seeing the Taj Mahal with River view was totally amazing and one can’t stop taking a lot of pictures. The 364 years old Taj Mahal is still standing strong and still looks beautiful.

This Taj View point provides the visitors with a lot of photo opportunities to capture Taj’s architectural marvel along with the river Yamuna.

Agra’s semi-arid weather along with humidity made us a little uncomfortable as the day moved towards afternoon.  After spending a few hours in Mehtab Bagh where we had good amount of photography practice, we moved forward to our next destination.

After driving around 10 min from Taj Mahal view point, we reached a Mughal mausoleum ‘ITimad-ud-Daulah’s Tomb’ – located on the left bank of Yamuna River. The tomb is often described as ‘jewel box’, sometimes called ‘Baby Taj’ and often regarded as a draft of ‘Taj Mahal’.

The tomb construction was completed in 1628 and commissioned by Empress Nur Jahan for her father. The mausoleum is built in white marble and red sandstone. Along with the main building, the structure consists of a garden, criss-crossed by water courses and walkways. Its garden layout, inlay designs, artworks, decorations and carvings are presage many elements of the Taj Mahal. The interior and exterior walls are decorated with white marble stone in images of cypress trees and wine bottles, or more elaborate decorations like cut fruit or vases containing bouquets. The cenotaphs of Nur Jahan’s father ‘Itamad-ud-Daulah’ and mother have been set side-by-side, a formation also replicated in the Taj Mahal. 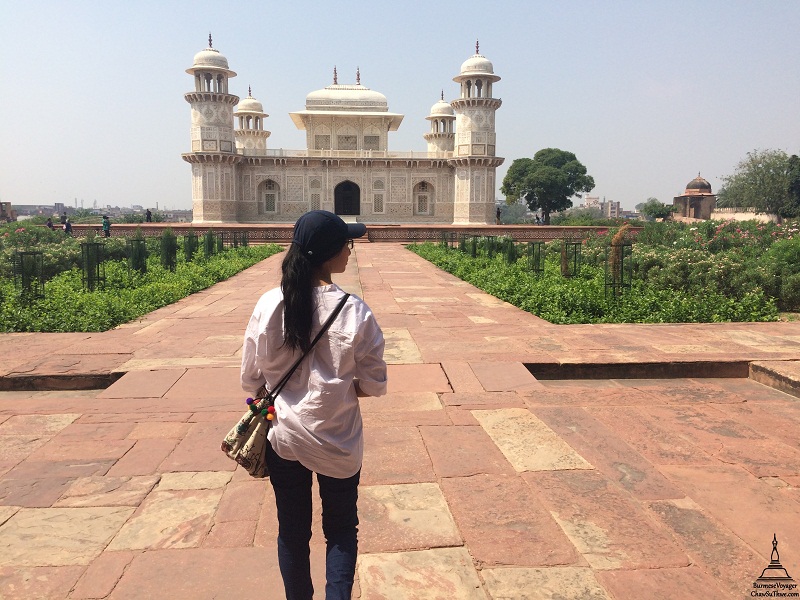 There are 4 entrance gates and one is beside Yamuna River. Sitting at a point overlooking the river Yamuna and enjoying some fresh air, gave us relief in the humid weather.

It was around lunch time and our stomach started making funny sounds. Then we drove for around 20 min to downtown Agra and stopped by a south Indian restaurant on the way. We had Thali (South Indian meal – rice, Puri and many curry side dishes). After having lunch and drinking enough water for hydration, we headed toward Red Fort. 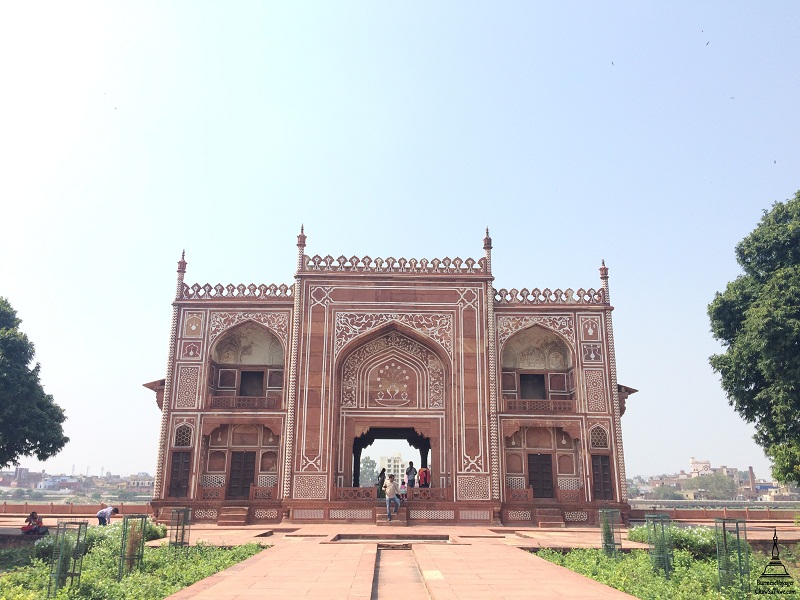 As soon as we reached Agra fort, there were crowds at the entrance gate. The place was bustling with tourists, no wonder it was one of the major tourist spots in Agra. Just by seeing the outside walls, I realized that this Agra fort was much bigger than Delhi Red Fort. It was the main residence of the emperors of the Mughal Dynasty till 1638 and it’s also a UNESCO world heritage site. The fort can be more accurately described as a walled city, with a rough exterior and a peaceful interior.

The fort was commissioned by Mughal emperor ‘Akbar the Great’ in 1565 and later converted into a palace during Shah Jahan’s time. This red sandstone fort is pretty big and include the Pearl Mosque or Moti Masjid, halls of public and private audience, Jahangir’s Palace, Khas Mahal, Mirrored Palace and the Musamman Burj. 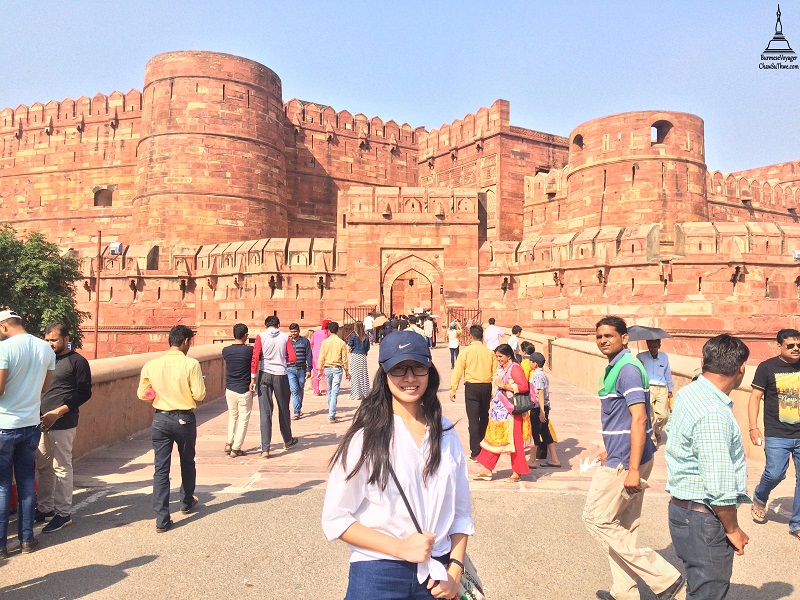 Wherever one goes, one can find different types of beautiful architecture and every corners of the fort was totally amazing. The view of River Yamuna and Taj Mahal from the top of the fort is breathtaking.

At the end of Shan Jahan life, he was imprisoned by his son in this Agra fort. Shan Jahan spent his last days here and died in Muasamman Burj, a tower with a marble balcony with a view of Taj Mahal (his wife resting place). 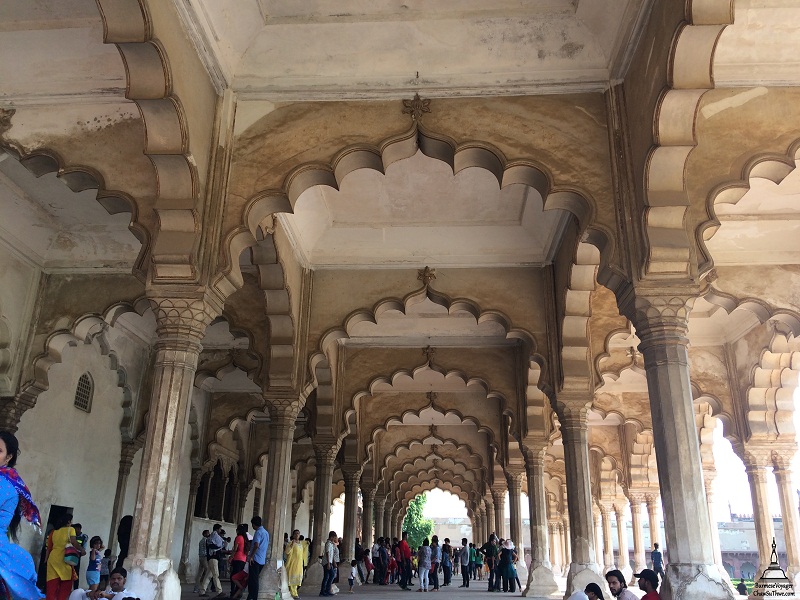 After visiting Agra fort, we surely wanted to see where exactly the last resting place of the Mughal Emperor ‘Akbar’ is.

Sikandra is where Akbar’s tomb is located and it’s his last resting place. Akbar himself planned his own tomb, selected a suitable site for it and built in 1605-1613. 119 acres of grounds with the vast, beautifully carved, red-ochre sandstone tomb is set amidst a lush garden with deers and langurs.

The buildings are constructed mainly from deep red-ochre sandstone and enriched with features in white marble. There are four gates and the largest is the south gate which has four white marble topped minarets and is the usual point of entry to the tomb. Inlay panels and details are geometric, floral and calligraphic, and similar to the carvings of Itamad-ud-Daulah’s tomb. 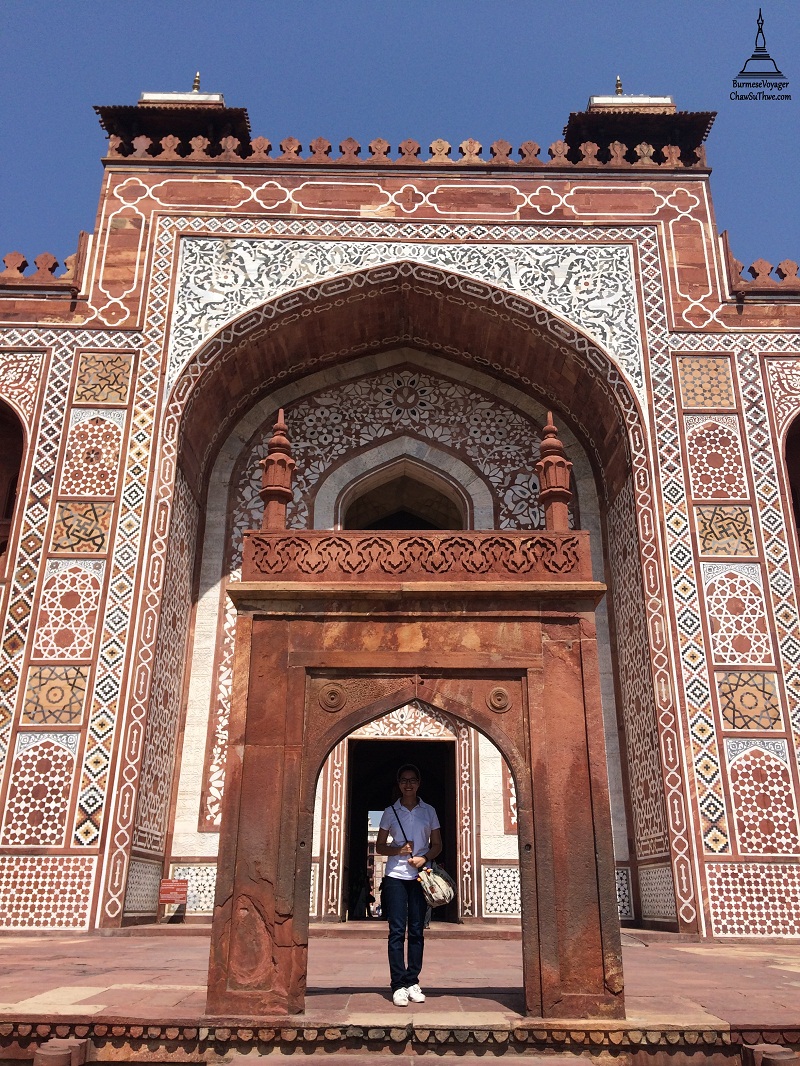 Corridors around the cenotaph were very pretty with large walk ways. An interesting thing we found was the symmetry and reflectiveness of the sections of the corridors. One could whisper in one corner of a section and it was easily audible in the diagonally opposite corner of the section. 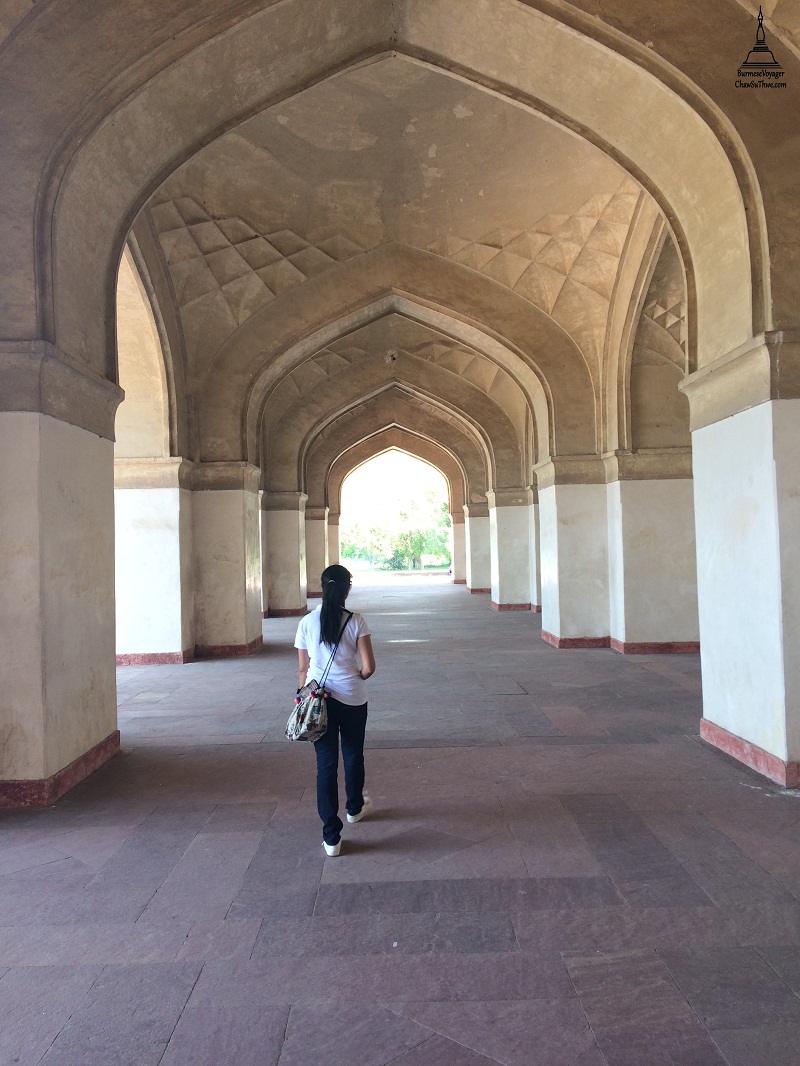 The tomb building is a four-tiered structure, surmounted by a marble pavilion containing the false tomb. The true tomb is in the basement. Tomb ceiling details and the wall carvings are amazingly beautiful and colorful.

The entrance passage to the main burial chamber was dark and cold that goes to Akbar’s false tomb in a huge circular hall (the true tomb as per traditions lies below it). There is a rectangular small window at the side near the roof providing outside natural light on the wall. The temperature inside was totally different from outside heat and being inside that dark and quite his place gave us an unknown feeling of peacefulness. 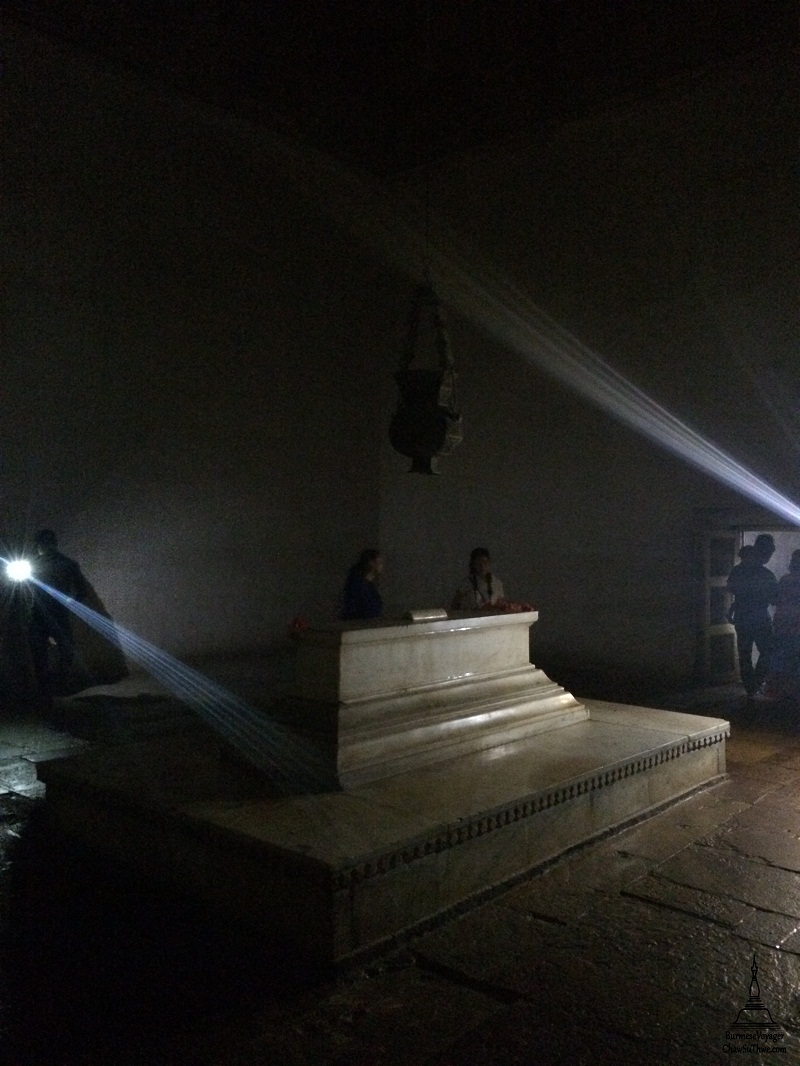 There is a Kahch Mahal located in the outside garden, built by Jehangir as a harem quarter later used as a hunting lodge.  An unknown Lodi tomb is also located in Akbar’s Tomb complex.

Akbar’s tomb was our last destination in our Taj city discovery. 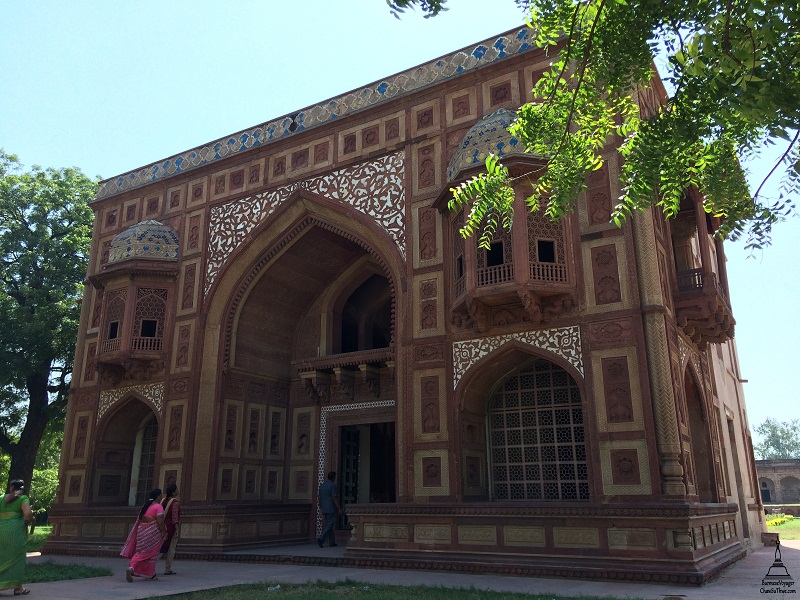 Revising the golden age of Mughals in this city, Agra, was totally worth and Mughal architectural masterpieces and heritage sites were amazing.

India itself is rich in culture and heritage, that’s why I love visiting various architectural places in India. 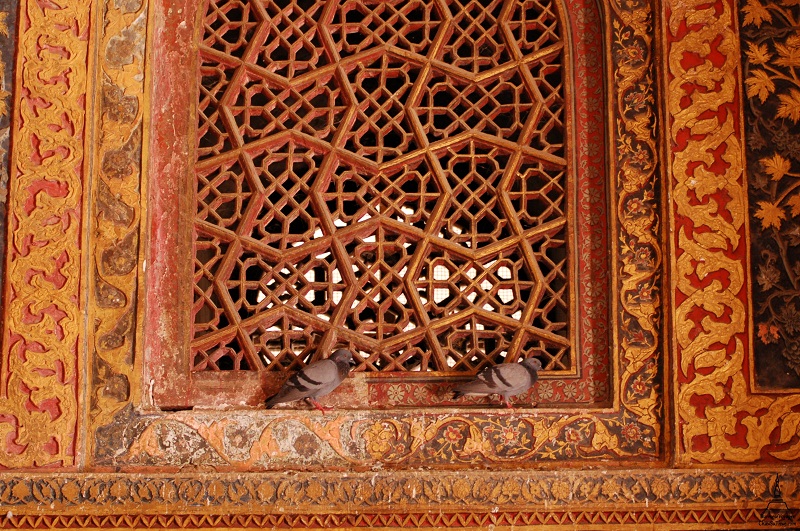